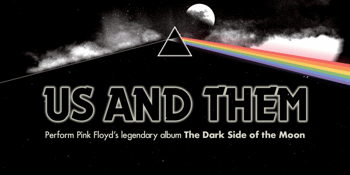 Us & Them perform Pink Floyd "Dark Side Of The Moon"

Badlands Bar (PERTH, WA)
Friday, 2 September 2022 8:00 pm
69 days away
18 Plus
Rock
Send this event to
Fast becoming an anticipated feature of the Badlands calendar, Us & Them return to perform one of the all time great epic albums.

There are hit albums, and then there’s Dark Side of the Moon. Pink Floyd‘s eternally popular song cycle has sold more than 15 million copies in the U.S. since its release on March 1st, 1973, and more than 45 million units worldwide. A true colossus of classic rock, the album made its creators – bassist/vocalist Roger Waters, guitarist/vocalist David Gilmour, keyboardist/vocalist Rick Wright and drummer Nick Mason – incredibly wealthy, and ultimately spent a mind-boggling 937 weeks on the Billboard 200.

In addition to its massive commercial success, Dark Side of the Moon was also a career-defining artistic achievement for the British quartet, one which marked Pink Floyd’s transition from an experimental, jam-oriented progressive outfit primarily beloved by college students and assorted “heads,” to a top-echelon rock act characterized by its rich songwriting – as well as by Waters’ mordant worldview. Recorded at London’s Abbey Road Studios in various sessions from May 1972 through January 1973, the album’s cerebral soundscapes (exquisitely captured on tape by Abbey Road engineer Alan Parsons, and mixed with the help of veteran producer Chris Thomas) and heavy lyrical musings on the human condition inspired countless bong-fueled headphone listening sessions in darkened bedrooms, but its songs also sounded great on FM (and even AM) radio.